Welding fume is nothing new, but has been making headlines lately as well-known and respected international authorities acknowledge its true danger.

Back to Articles & Resources View all Welding & Fabrication content

Let's clear the air. Welding fume is nothing new, but it has been making headlines again lately as well-known and respected international authorities acknowledge its true danger. In 2017, welding fume was reclassified as a Class 1 carcinogen by the International Agency for Research on Cancer (IARC), based on “substantial new evidence” of the harm it can cause.

Earlier this year, the Health and Safety Executive (HSE) in the U.K. released a change in enforcement expectations for welding fume, stating that enforcement around controlling exposure to even mild steel welding fume will be strengthened immediately. In the United States, the Occupational Safety and Health Administration (OSHA) has numerous, rigorously enforced standards around minimizing exposure.

Standards put in place by organizations like OSHA and HSE aim to reduce exposure through a “hierarchy of controls”. Steps include elimination and substitution, engineering controls, workplace administrative practices, and use of personal protective equipment. However, it’s important to note that even attempts to engineer out the risk of exposure may still leave traces of these harmful substances in the air. The below photos show respirator filters after being used for only one day in a welding shop with compliant ventilation in place.

The results are a powerful visual representation of how even workplaces with compliant extraction systems may still expose workers to welding fume. Without a respirator, the substances in those filters could easily end up in workers’ lungs.

The consequences on health can be fatal, progressive, and incurable. Potential health effects associated with the inhalation of welding fume include a range of serious lung complications and diseases, as well as damage to the brain and nervous system. Common ailments include various types of cancers, kidney failure, emphysema, and lead poisoning.

Though often considered the last line of defense, respirators cannot be overlooked as an important part of protection in the mission to reduce exposure. 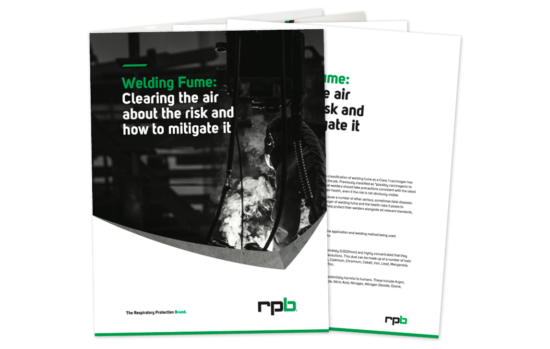 This complimentary white paper is an in-depth exploration of what welding fume is, what makes it so dangerous, and how respirators play a key role in protecting welders’ lungs.